$6.99
Blasterball 3 is the third and most recent installment in the Blasterball series. It was released for PC in 2006. This edition introduced new gameplay elements, like neutral and negative power-ups, a custom level designer, and the option to play your own music. It also displays advertisements for other games in between levels.

The gameplay for this game is very similar to its prequels. The objective of the game is to control a paddle to aim a ball and destroy blocks in order to complete levels. Every so often, the player will have to face a boss to advance, just like in Blasterball 2.

Blasterball 3 integrated a level editors for players to take advantage of in order to create their very own levels, play them, and send them to people throughout the world through the game's internet connection. There have been many various, distinct levels created and submitted by hundreds of people.

This was the first game to include a level editor, and allowed you to upload the stages online for others to see. It was discontinued sometime in 2010. All of the stages that were ever uploaded could still be downloaded from the game, or the official site. You can also distribute these custom stages after this online service was shut down. 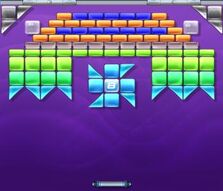 An example of a custom stage

This is a placeholder logo found in the game's files. 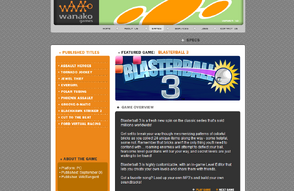 BlasterBall 3 featured on Wanako Games' site.
Add a photo to this gallery

Retrieved from "https://blasterball.fandom.com/wiki/Blasterball_3?oldid=4799"
Community content is available under CC-BY-SA unless otherwise noted.